Bitcoin went absolutely parabolic over the weekend! After topping out at $7,500, traders are now wondering what is next.

Last week brought an onslaught of bearish news that typically negatively impacts Bitcoin price 00. But surprisingly, it shrugged at the news and has gone bananas as its dominance rate rose to highs not seen since 2017.

At the moment, nearly every analyst is screaming “bull market” and making calls for what they believe the new all-time high will be.

Friday and Saturday’s amazing run firmly brought Bitcoin above $6,000 to the previous resistance zone where $6,800 and $7,300 held before the November 2018 40%+ correction and the icing on the cake was a quick blow off to $7,500. A number of crypto analysts have also pointed out that while Bitcoin has gone parabolic, the parabola has broken as the digital asset has not set a higher high after reaching $7,581?

It should also be noted that Bitcoin’s lightning quick ascension took place with few retracements and a pullback. In other words, consolidation could be imminent.

Bears are also likely closely eyeballing the current price action to establish short positions right at the current top so traders should exercise care and not FOMO into a position or play the upcoming retraces without some sort of stop loss.

The weekly RSI has entered the overbought zone and as other analysts like Dave the Wave have pointed out, the MACD is more extended now that it was during the peak of the 2017 bull run. 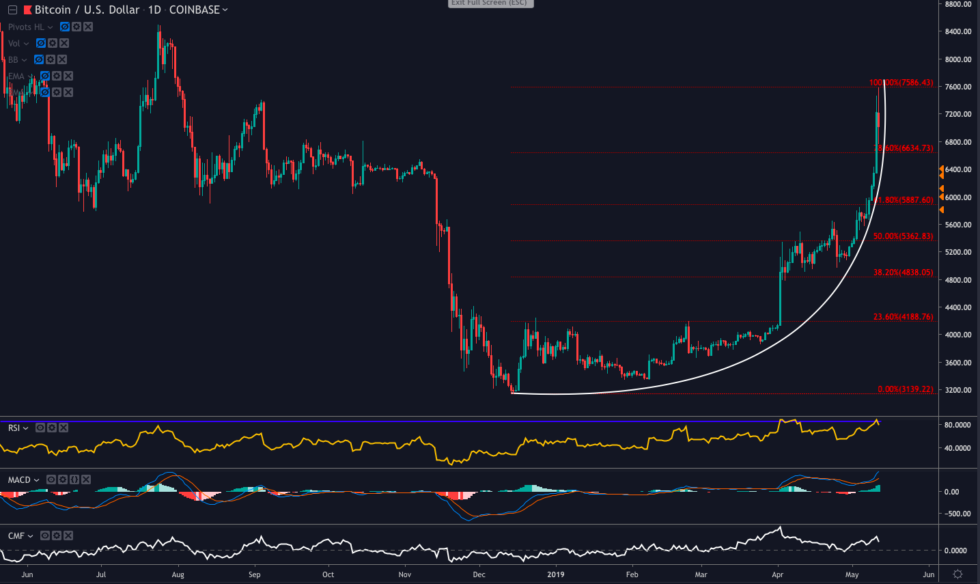 The daily chart shows that the RSI crossed 85.3779, which is the point that traditionally marked a trend change in BTC price. BTC/USD first topped a$7,489 at this threshold was crossed and then ran a little further to $7,581 before cooling off and entering what is likely to be a period of consolidation.

Going into the weekly close, BTC looks set to close above the $6,300 if not the $7,300, which most traders believed would pose significant resistance. According to the daily and weekly chart, $8,165, $8,200 and $8,500 are the next levels which could pose resistance for BTC to overcome.

The general consensus is that after such an amazing run BTC needs to either consolidate and regain strength or retrace to previous supports as the RSI, MACD, and Stoch are becoming overextended on the daily timeframe. 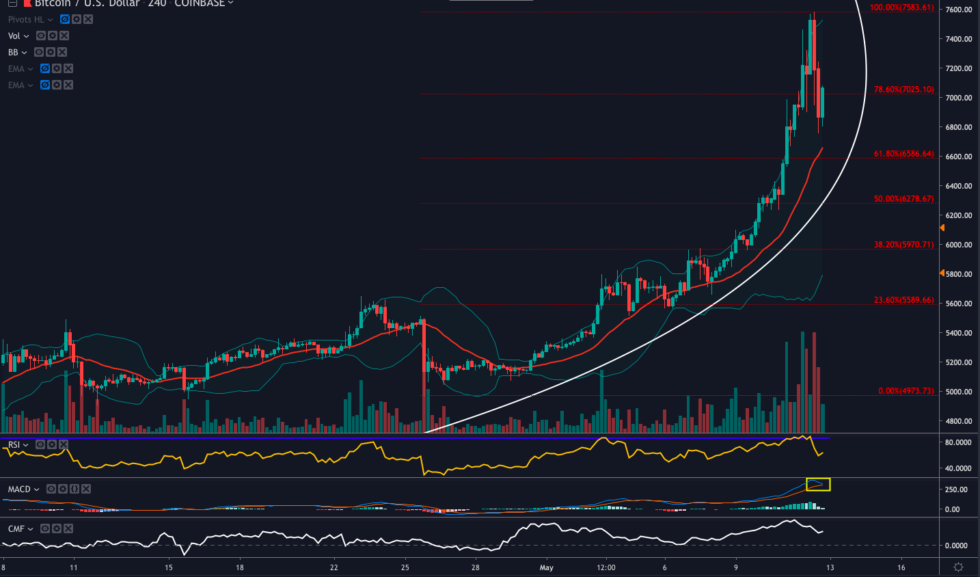 Traders looking to catch the dip might set alarms at $5,900, $5,500, and $5,100 in order to play oversold bounces and following bull crosses on the hourly, 4hr, daily and weekly MACD seems to be the best method for putting traders into profit.

At the time of writing the 4-hr chart shows the MACD nearing a bearish cross and the RSI remains in bullish territory.

Traders should also keep an eye on the BTC-USD Longs to Short ratio and BTC-USD shorts in general as bears are likely to set up positions at the recent top and additional rejection points like $7,000.

Where do you think Bitcoin will go over the next 48-hours?

[Disclaimer: The views expressed in this article are not intended as investment advice. Market data is provided by Bitfinex. The charts for the analysis are provided by TradingView.]