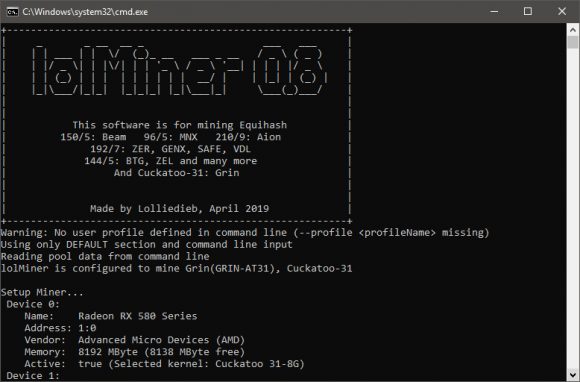 The latest update of the AMD GPU miner lolMiner 0.8 brings support for the Cuckatoo 31 algorithm used by Grin, for GPUs with either 4GB and 8GB video memory (lower memory mens less performance) for Windows and Linux. To mine with the new algorithm you need to use the parameter --coin GRIN-AT31, NiceHash does not currently seem to be supported for C31 though. It is interesting to note that the Grin cycle finding is completely done on the GPU, so the miner has almost zero CPU load (on AMD, Nvidia has some due to OpenCL back end). Aside from Cuckatoo 31 support the new version also has some Stratum bug fixes (NiceHash) for Equihash 144/5, 192/7 and 96/5, improved general stability of the miner as well as added distinct 1GB, 3GB and 4GB as well as 6GB and 8GB kernel for mining MNX for Windows (the Linux version that already implemented had this in 0.7.1).

We remind you that lolMiner is a closed source OpenCL GPU miner available for Windows and Linux as pre-compiled binaries only and that there is a developer fee for using the software (1% for all supported algorithms). It might work on Nvidia with OpenCL, however stability and performance might not be optimal, so it is best for use with AMD GPUs.

– To download and try the latest lolMiner 0.8 OpenCL miner for Windows or Linux…